The energy generation by our systems depends on local wind circumstances and the structure of the terrain.

Wind is the directional, string air movement in the earth’s atmosphere.
Movement of air mass is mainly caused by temperature difference and varying density and pressure. These variations are caused by radiation from the Sun, which depending on geographical location, time of the year and specific terrain factors is absorbed in different degrees causing the air to be heated up in varying degrees. Hot air has a lower density than cold air and rises up. Cold heavier air sinks and flows to the low pressure areas – the air masses begin to circulate. The wind direction s determined by the position of high and low pressure areas.
These moving air masses contain kinetic energy. The amount of energy depends on the air mass and its speed. Historically this energy was captured by windmills that transfer the energy directly into mechanical energy to drive machines. Modern wind turbines transform the kinetic energy into electricity. The greater the speed and mass of wind, the greater the amount of electrical current. Wind speed is the determining factor for current, as power increases to the third power.
Wind speeds are usually categorised in 12 wind strengths. The effects of each wind strength in nature are described in the chart on the right.
Wind speed is crucial for the economic effectiveness of wind turbines – as a rule a doubling of wind speed translates into an eightfold increase in electric power. 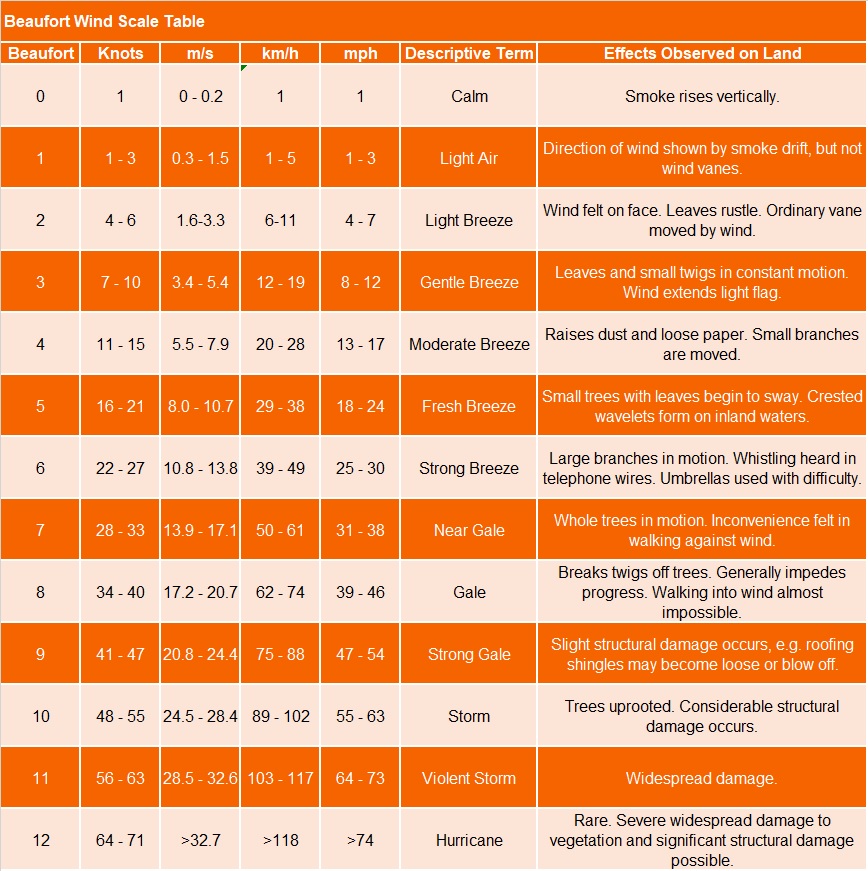 The choice where to place a small wind turbine is crucial for the economics. Evaluating a location is very intensive, as it is not just the wind potential of the region that determines; in addition the specific local landscape features influence wind flow. Before investing in a turbine an evaluation of the suitability of the location is required. Visual Inspection of the location and numerous other aids help to determine is the planned location will indeed enable useful energy generation.
For an initial evaluation public and private weather stations supply useful data. Freely available wind maps can for example be found on the website of the Deustche Wetterdienst. Internet also offers numerous providers of current information and wind prognoses, next to historical wind and weather data. These data enable realistic prognoses concerning the suitability of the location for a wind turbine.
Coastal regions offer higher annual average wind speeds than inland locations. Also the heights in middle mountain regions generally translate into good locations for small wind turbines.

The wind flow, at for small wind turbine relevant heights, is influenced considerably by the characteristics of the surrounding terrain. Mountain ranges, forests and buildings disrupt the wind flow. The terrain is categorized in various classes of roughness.
When choosing a location wind barriers should be kept at enough distance from the wind turbine. Especially the main wind direction, which will translate into the highest energy yield, should be as free from obstruction as possible. Every obstruction reduces wind speed and changes wind direction; a turbulent zone is created that has lower kinetic energy. These zones of reduced kinetic energy lead to a significantly lower energy yield from small wind turbines.